Like the helmets of their forbearers, Roman helmets and gladiator helmets are iconic of Roman warriors and are, therefore, almost instantly recognizable. Here at Medieval Armour, we endeavor to provide the widest selection of Roman helms possible, offering both the recognizable helms depicted in movies and fiction as well as the esoteric and elaborate ones worn in history. Roman helmets had many names, depending on its function, although the most typical roman helmet was the galea, or the imperial helmet (note that galea is Classical Latin for 'helmet'). The imperial helmet was worn by virtually every member of the Roman war machine. That is not to say that all Roman helmets were the same, though, because as you can see here, many had subtle differences, which helped to separate, say, the roman trooper helmet and the roman soldier helmet from the roman guard helmet. The crested Roman helmets found here were typically reserved for officers and military leaders, as the plume or crest signified importance (and sometimes, duty). Unlike classic Roman helmets, though, gladiator helmets were infinitely more distinctive and varied. This is because most gladiator helmets, unlike the Greco roman helmets of the day, were designed to be both a help and a hindrance to the warrior wearing them. All in all, though, there's a wide variety of Roman helmets gladiator helmets to be seen here at Medieval Armour, which means that if you planned on seeing them all, you'd best get to browsing. 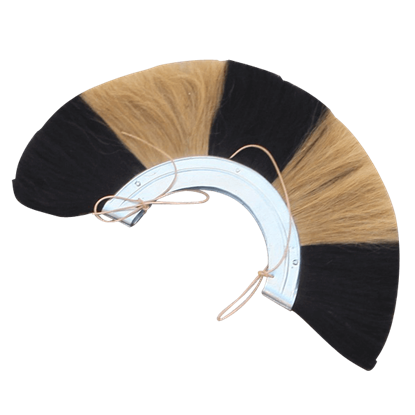 Item # AH-6104
Plumes were not just ornamental decorations that were attached to helmets for reasons of style. In fact, a decoration like this Black and Natural Plume would have been significant, indicating a person or officer of importance and rank.
$59.17
Add to cart 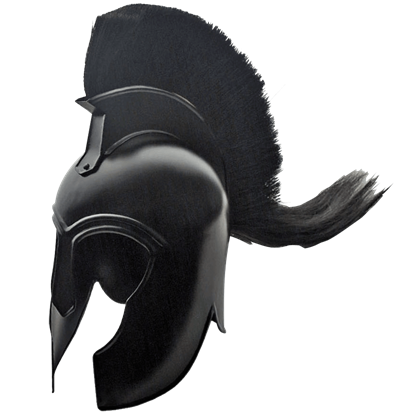 Item # ZS-910938
Ancient Greek armor really does not get any more iconic than a Corinthian helmet with a long plume. This Black Plumed Trojan Helm is a sleek way to recreate the look of a mighty Greek Warrior in your decor or period themed costume.
$105.90
Add to cart 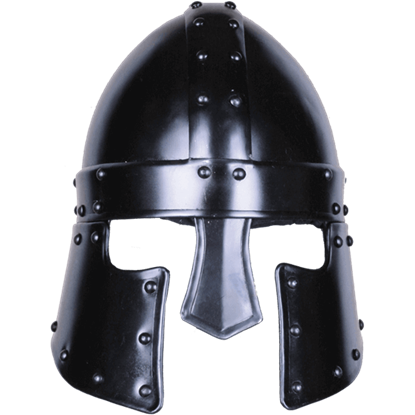 Item # MY100080
Inspired by the late Roman Empires horseman helmet, the Blackened Halanor Barbuta Helmet provides good protection to the wearers head and face and possesses an impressive look for LARP warriors and collectors to enjoy.
$121.00
Add to cart 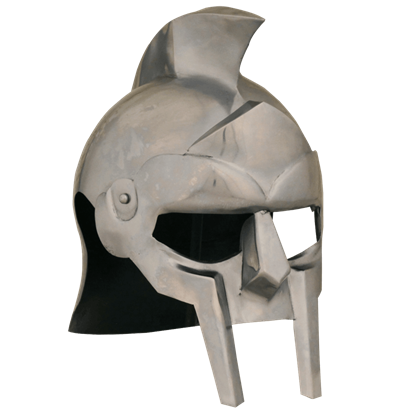 Item # AH-H014
The armor of a gladiator was often designed to be as protective as it was aesthetic, fulfilling the purposes of appealing to the crowd and protecting its wearer. This Crested Gladiator Helmet is a piece of armor that does just that.
$93.19
Add to cart 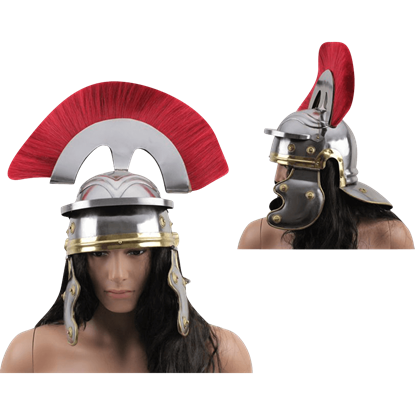 Item # NP-V-80612D
As a general leading a Roman legion, you should have a different helmet than the regular soldiers. Add the Deluxe Roman Officer Helmet to your costume. It also makes a great addition to any armour collection or classical home decor.
$157.50
Add to cart 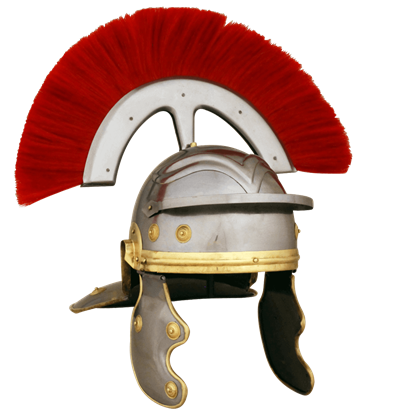 Item # AH-H019
No helmet is perhaps as iconic as the Roman galea, or imperial helmet, especially those worn by the Centurions in the Legion. This Economy Centurion Helmet recreates its design for any warrior to own, enjoy, and wear.
$144.85
Add to cart 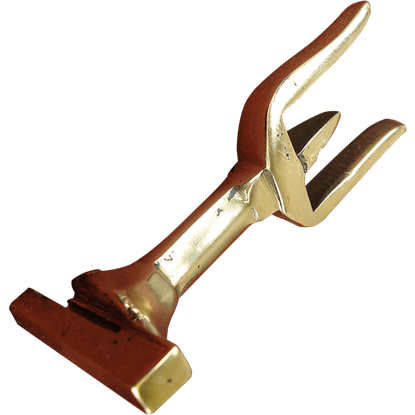 Item # AH-6191
When you own a helmet, you want to present it in the most dramatic style as you possibly can. The Front-to-Back Plume Holder allows you to put your historical helmets on display with a plume to give it added flair.
$21.37
Add to cart 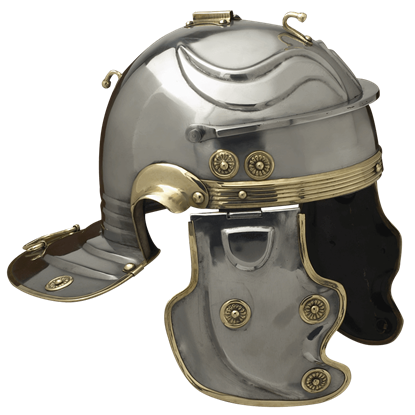 Item # AH-6052N
The imperial helmet is a classification applied to the helmet that was considered by many to be the quintessential Roman galea. The imperial Gallic G Helmet is a replica of a historical helm found on an archaeological dig.
$175.09
Add to cart 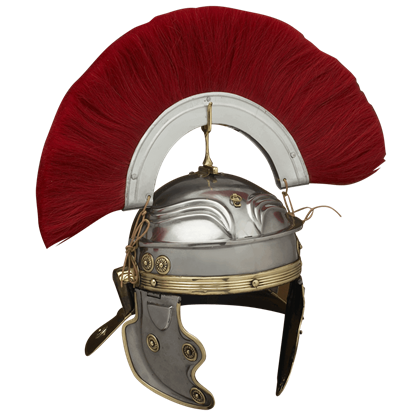 Item # AH-6069
The imperial helmet is a classification applied to the helmet that was considered by many to be the quintessential Roman galea. The imperial Gallic H Centurion Helmet is a replica of a historical helm found on an archaeological dig.
$243.13
Add to cart 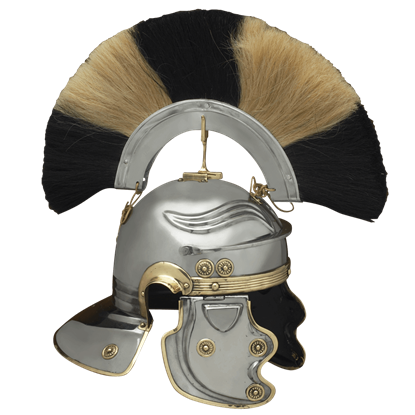 Item # AH-6066
The imperial helmet is a classification applied to the helmet that was considered by many to be the quintessential Roman galea. The imperial Gallic H Special Command Helmet is a replica of a historical helm found on an archaeological dig.
$243.13
Add to cart 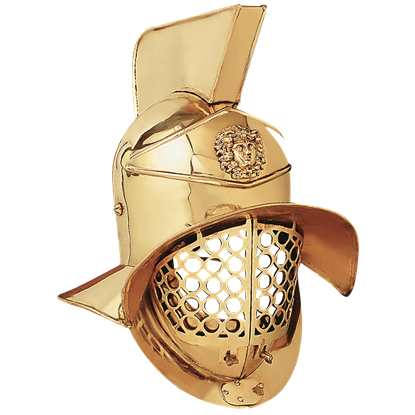 Item # AH-6203B
Similar in shape to the classic Thracian helm, this helmet differs in only one respect, and that is the face guard. Otherwise, this Gladiator Brass Arena Helmet was just as protective and just as impressive as its other rivals.
$413.23
Add to cart 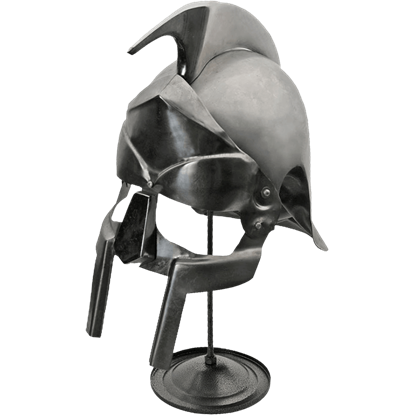 Item # ZS-901127-WOS
The Roman gladiators were powerful warriors and entertainers who have captivated mankind for centuries. You can commemorate or even emulate these impressive soldiers when you equip yourself with the Gladiator Helmet with Stand.
$54.95
Add to cart